A Member of the European association of Ships in bottles. https://www.shipinbottlemakers.com/
https://www.facebook.com/groups/2094065110907806/ Just finished the F15A card model and now doing a 1:40 scale model of the severn class RNLI lifeboat.

SELECT a MODEL below and SCROLL DOWN to view it's diary . Click on any picture in the diary and a slideshow will open up.
BEST VIEWED on a COMPUTER SCREEN.

SHERMAN "FURY" in a bottle

After successfully putting TIGER 131 in a bottle, I found a card model of the Sherman tank as used in the film “FURY”.


I first printed out the parts and built the card model. This was to enable me to see where I could divide the parts in order to go into the bottle and with the least join lines being obvious.

The first stage was to make the lower hull body in two halves with Jelutong. These halves were sanded to shape so that the card parts fitted over them. Locating pins were now fitted. The two halves were then fitted together and the card parts glued on with white wood glue (pva). When dry, the parts were separated by gently running a scalpel down the centre.

The wheel assemblies were now made from card and glued to the sides of the lower hull pieces.
The tracks were printed out and cut and joined together. The treads were now individually cut out and glued onto the tracks.

The various fittings were now made – some to be fitted now and others to be fitted once bottled.
Holes were drilled into the Jelutong to lighten the body parts.

The turret was made in two pieces, shaped, pinned and the card parts glued. The top of the turret was printed out and trimmed to fit. Toothpick locating pins were fitted on the turret top cover, under the two fittings forward of the hatches (see the white locating areas). This will be fitted after bottling, once the turret is glued together onto the upper body, in order to cover the join. 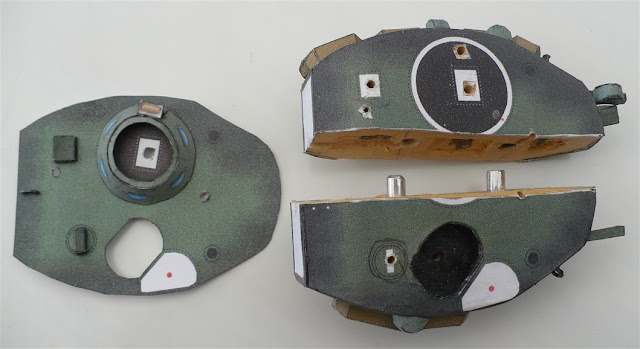 The bottle was now prepared. The ground line was determined and the inside of the bottle coated with 2 part epoxy mixed with a few drops of brown and black paint to give a soil colour. (Similar to the method used on “Mountwood” but without the plasticine). A false floor was constructed, similar again to “Mountwood”.
Three strips of card were fashioned to fit on the false floor, coated with pva glue and covered with “ROIBOS” tea leaves. This is made from the branches of the Red bush from South Africa. You can substitute ground cover as used by railway modellers but “ROIBOS’ tea bags are as cheap as chips!
When set, the card pieces were inserted into the bottle and glued into place.

The various fittings were now glued to the front of the hull, covering the join, and finally, the main gun fitted and glued in place.

The bottle cap had its centre cut out and a disc of plastic from a CD case was glued in place. 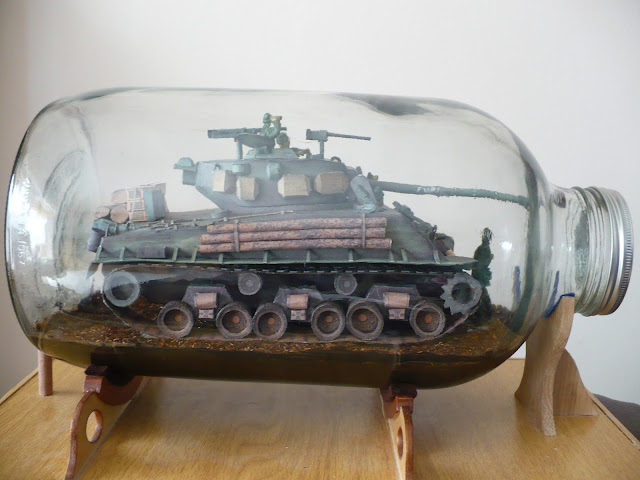